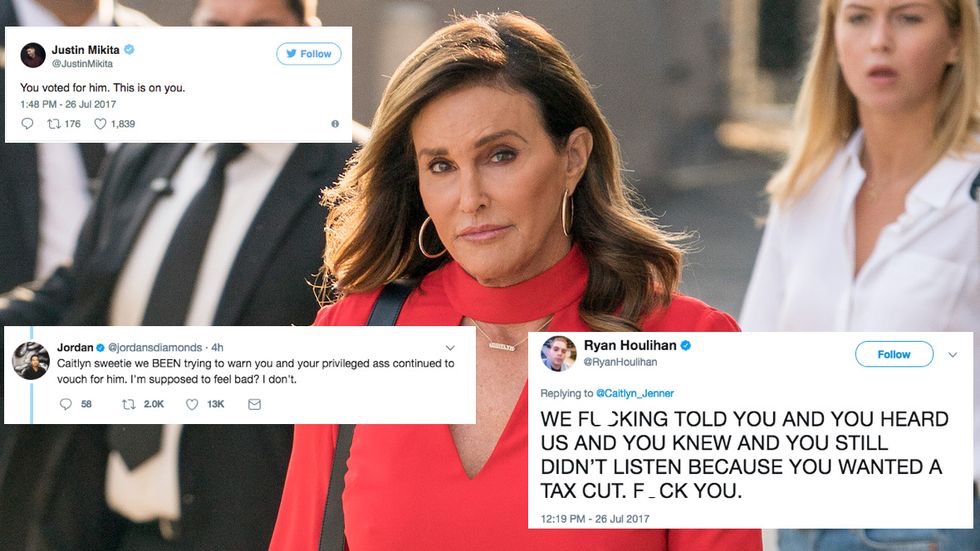 On Wednesday, 7/26/17, the President of the United States of America TWEETED that he would be reinstating the US military ban on transgender people. Honestly, this didn’t surprise or disappoint me. From the moment Donald Trump was elected, I knew to expect all sorts of crazy shit.

Shortly after, Caitlyn Jenner tweeted in response “There are 15,000 patriotic transgender Americans in the US military fighting for all of us. What happened to your promise to fight for them?” She also retweeted President Trump’s tweet from 6/14/16 “Thank you to the LGBT community! I will fight for you while Hillary brings in more people that will threaten your freedoms and beliefs!”

Here are my thoughts on this:

Caitlyn Jenner is intriguing to me. She is a republican. She supports a political party, that frankly, wants nothing to do with her, LBGTQ community, or anything else that isn’t traditional or conventional.

She publicly supported Trump. Donald Trump, who in Jan 2016, told interviewer Chris Wallace on Fox News that he would “strongly consider” appointing new justices who would overturn gay marriage. She was in favor of Trump, who chose Mike Pence as his Vice President. Mike Pence, who was in charge of an organization that published a journal article, declaring homosexuals unfit for military service. Who once supported “gay conversion” with the use of electroshock therapy. These are the candidates Caitlyn willingly and proudly approved of. The information stated above can be found and proven on Snopes.com

Caitlyn Jenner appeared on the Ellen Show in 2015. She was reluctant to support gay marriage because she’s “traditional” and a Christian (a religious group that wants nothing to do with her either). This, rightfully so, caused uproar in the LGBTQ community.

She was oblivious and lacked compassion for those who had to transition who weren’t as privileged as she was. Those who needed to go through great lengths to transition, even resorting to prostitution in order to afford hormonal treatment and procedures. Those who were treated like shit every day on the street, even assaulted, because they bravely refused to conform to what society wanted them to be. Yet, compared her struggle to the struggles of the average trans person. So now, LGBTQ community doesn’t care for her much.

I suspect her speaking out has more to do with redeeming herself in the public eye VS giving a shit.

Caitlyn Jenner, you can’t complain about what President Trump is doing if you handed him your vote. You were all about making American great again, clearly forgetting that you were a man then. Not something that society and the government regard to be nothing more than a psychological disorder and laughing stock. You forgot you are now a part of a community America still hates.

America was never great to the LGBTQ community, minorities, or even women. The rights that these groups have now, were not the outcome of an epiphany the government all of a sudden had. No one woke up and said “Hey! Let’s stop treating people like garbage. Equality for all!”

No. They were earned and fought for vigorously. Something you know nothing about because these are struggles that never pertained to you before. Where was the outrage when women and minorities were constantly disrespected and patronized during Trump’s campaign? Nonexistent. It took someone now nicking away at your privilege for you to say “Hey! This is an issue! You cant treat people this way!” Caitlyn, you wanted MAGA, you got it. Served to you on a piping, hot platter. Enjoy.